"If Young Metro Don't Trust You" is one of the DJ tags of producer, Metro Boomin'. The phrase has become popular on Twitter, tweeted along with images that detail the consequences of not being approved by Metro Boomin'. The tag became popular on twitter jokes following its use in the songs Jumpman, by Drake and Future; and Father Stretch My Hands Pt. 1, by Kanye West, from the album The Life of Pablo. 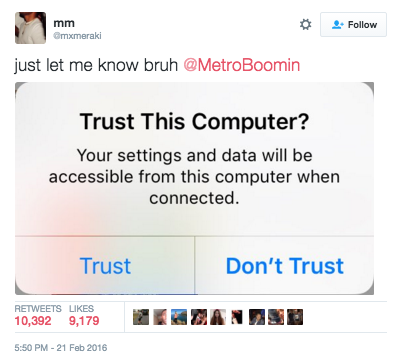 The origin of the tag comes from the song "Right Now" by Uncle Murda featuring Future which was also produced by Metro Boomin. It later gained popularity when it was sampled as a DJ Tag in the intro to the song "Jumpman," by rappers Drake and Future. The phrase is a shout-out to Future's producer Metro Boomin', who Future indicates must approve of all associates, or else violence will ensue. The lyric was reprised by Future on Kanye West's "Father Strech My Hands Part 1" and released as part of The Life of Pablo in early February.